Journey through development of the project was complicated. Full of doubts until the end, which is now more of a beginning. After completion, I realized how personal current result and development is. That might be why for other people it is so hard to understand it. It might be even incomprehensible. Nevertheless, for me, it is still an important anchor.


Development was divided into two parts: practical (in this case a video game), theoretical (written part is available here).

Game in relation to art

Part of the theoretical thesis was and still is my urge to search a place for this medium in relation to art. Currently, it is important to understand video game as a normal medium, appropriate for use of communicating ideas. Video games / digital games have to go through the same route as books, audio, video etc. Contemporary digital games occupy a completely different field in the context of interactivity. They are becoming a key segment in interactive production. By unifying the terminology and subsequently reflecting on games in the academic environment, this area can be freed from constant trivialization.  The strong game scene itself is correcting information in parallel.

"It is important if the art world will embrace not only video games, but even part of their culture. Especially the one in which they act as a medium. This does not necessarily mean that games will start appearing in galleries. Galleries are more likely to start appearing in games."

A lot of time was devoted to visual shortcut. Ideally, one that will listen to me, not limit me, and allow me to create a targeted atmosphere. It was the atmosphere that was central to the whole project. The first attempts were devoted to watercolours, which soon proved to be unsuitable. Undoubtedly, I myself felt the limitations of technology. It was caused especially by the complicated process of digitalization, but also by my own approach to work. However, I followed the chosen technique mainly because there was no other alternative. In the autumn, I went to the forest for advice, which later served as a model for my work. It fascinated me as a whole visually, the diversity it had within. A swamp where birches grow tilted, in contrast to vertical spruces, which creak when wind blows. Totems. Pines, meadows, and yet it was only a small grove just outside the city. 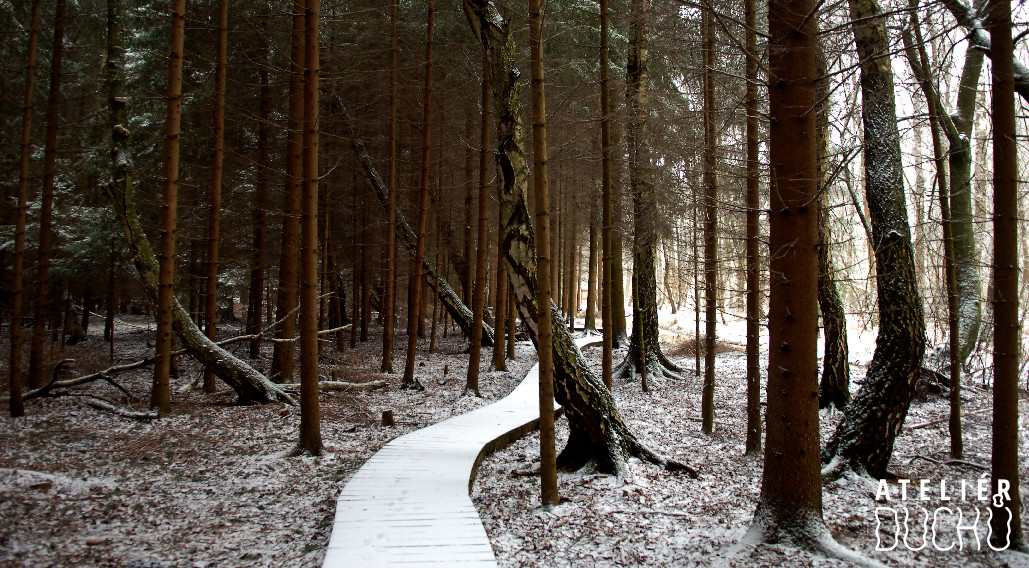 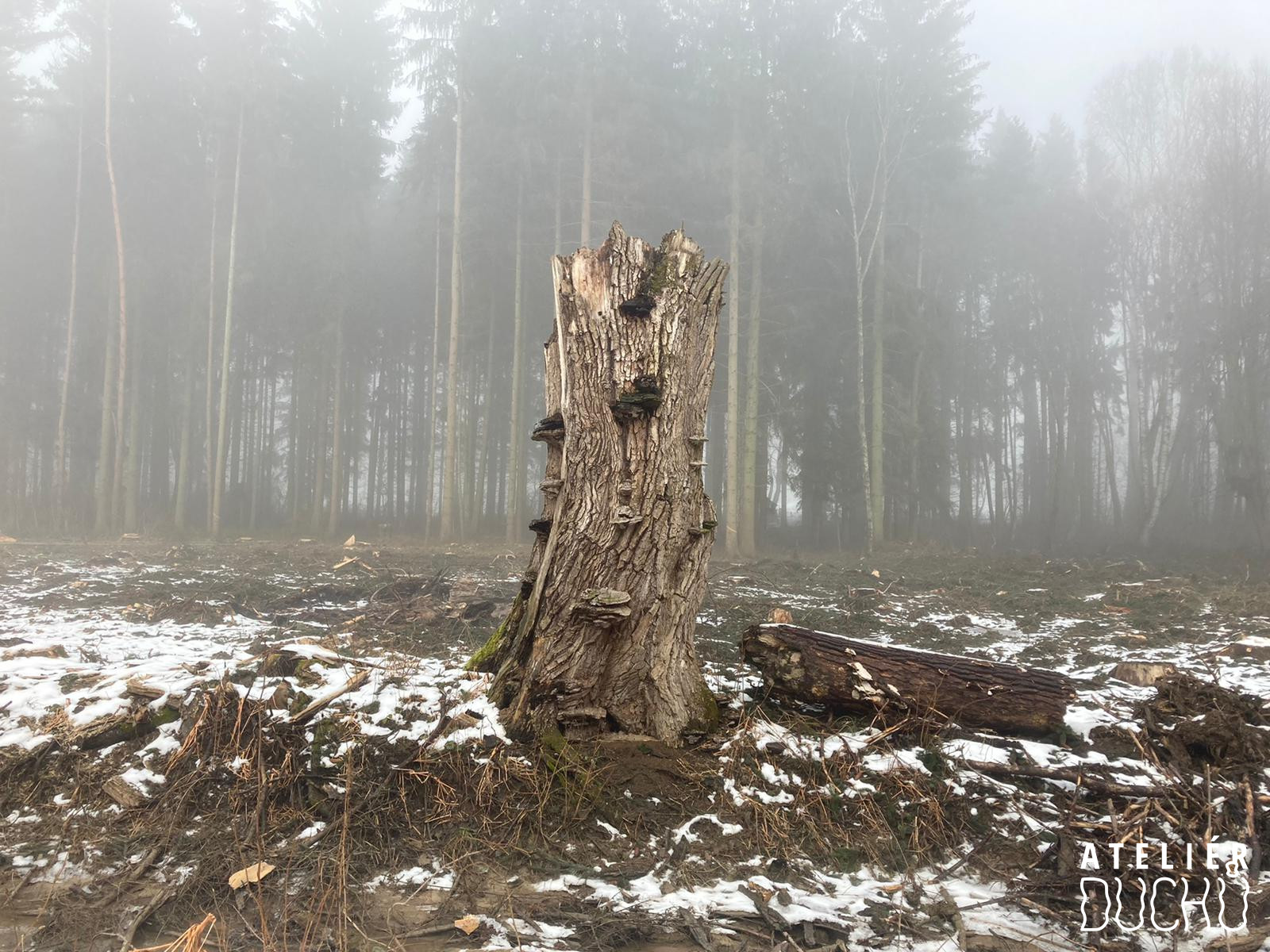 Vodáresnký les - felled forest during the past year /2021

By observing the movements of trees and leaves, I came to a visual shortcut in the form of noise. First, I created a small sketch of the animation. The noise here was represented only by the shadow of the leaves and by flying bird. After this test, I began to be sure that such an approach could work.

The Forest project gradually began to emerge. I knew the output would be a digital game. The medium is attractive to me, even though I have the least experience in it. I also wanted it to be an adventure free of point and click game mechanics. The biggest difficulty suddenly was the watercolour technique itself. Gradually, it was reduced. It seemed like a risk backed by uncertainty.

Cut-out of the original forest design / 2020

The move to Unity led to the first version of the game environment. It was animated and had functional parallax. The content of the project was created in parallel. In terms of basic function, the work seemed almost done. It was possible to continue on his path. However ... something fundamental was still missing. The atmosphere! So according to my ideas. Untightened, abstracted, authentic.

Leaving the watercolour was a decision that made me very relieved. The motivation to visually create "from scratch" and not to follow established techniques, which, however, did not meet my conditions, opened up other possibilities for me. Suddenly there was an unlimited range of colours, freedom of format and many other benefits. In particular, the commitment to digitization has disappeared. The animation was smoother and its options freer. Overall, I found a new desire to work. However, I still consider watercolour to be one of the most beautiful art techniques.

The new visual approach was sufficient with very limited colour. The forest sank into the night. Night is the time when our imagination awakens. The project now hides symbols or direct links to selected fairy tales. However, the main plot line is fictional, it is reflected in the generalization of the atmosphere in fairy tales. 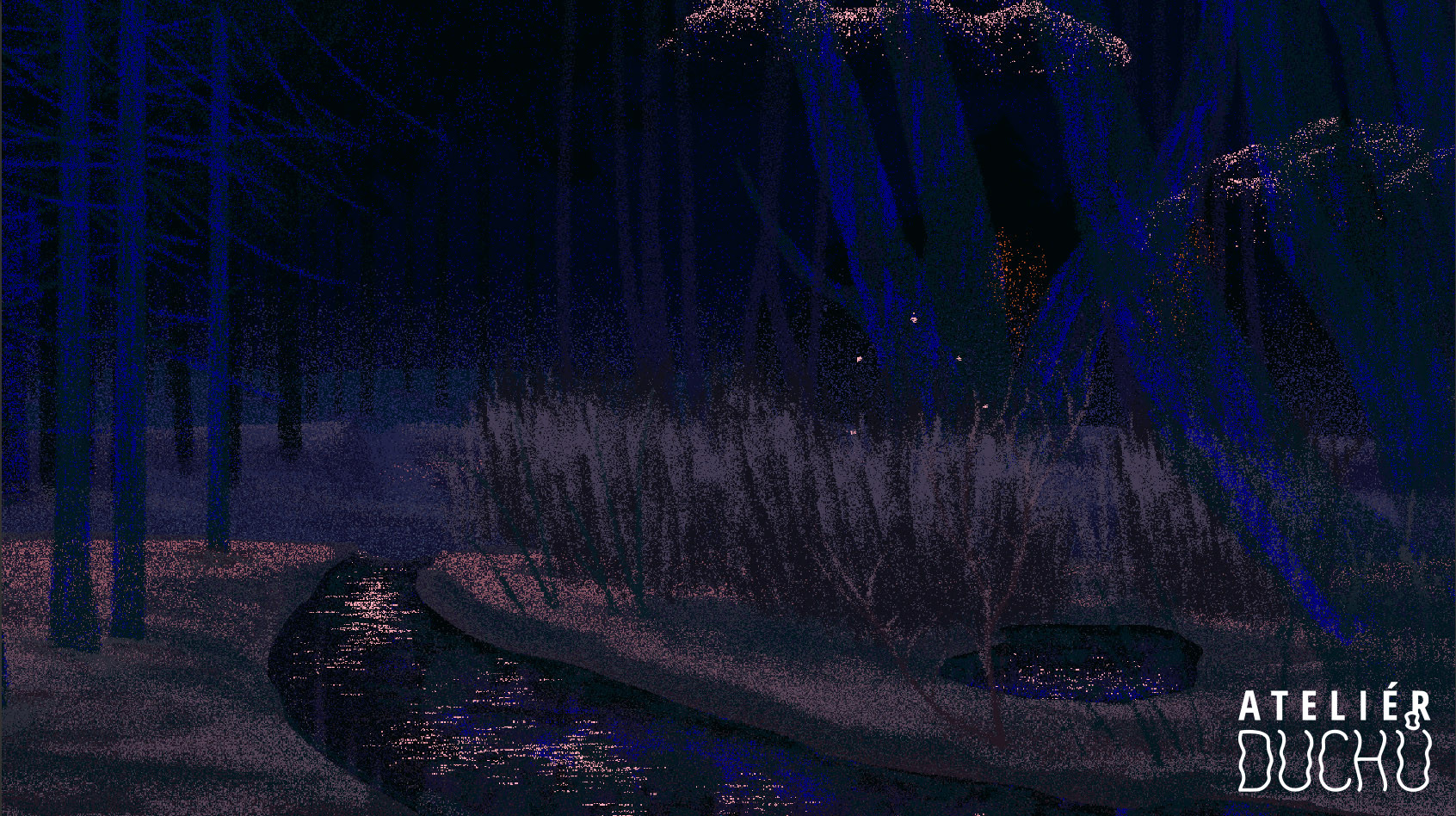 A fairy tale as an endless source of magic and imagination

My long-term interest in the mythology of fairy tales and magical realism grew into an urge to transfer atmosphere from books to the medium of digital games. A fairy tale can contain important messages. It introduces us to the magical world (or its elements), which is part of our everyday world. It stimulates the imagination as well as the perception of mundaneness.

Visually, my original colours were based, for example, on an illustration by Ivan Bilibin, a Russian illustrator of fairy tales who lived at the turn of the 19th century. It was also one of the reasons why I worked with the HUD (head up display, type of information graphics) in the project. The frame is an integral part of the illustration. Its function is not only decorative. The frames contained information, for example, about the environment where the fairy tale takes place. They could even describe an idea or event that is to happen, has happened, or is happening. The just mentioned HUD also plays a similar role in video games.

Sample illustration of I. Bilibin / 1900 approx 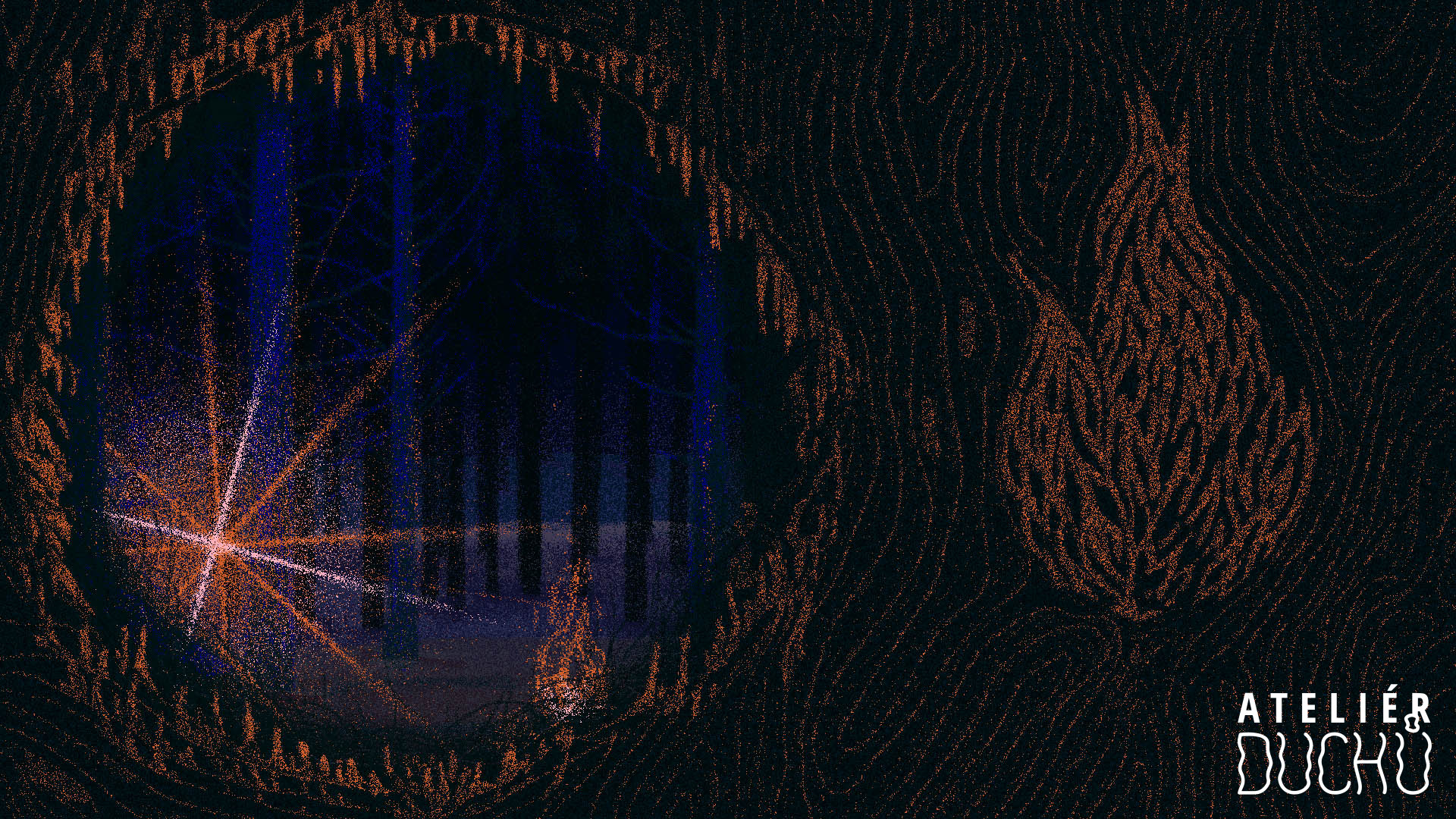 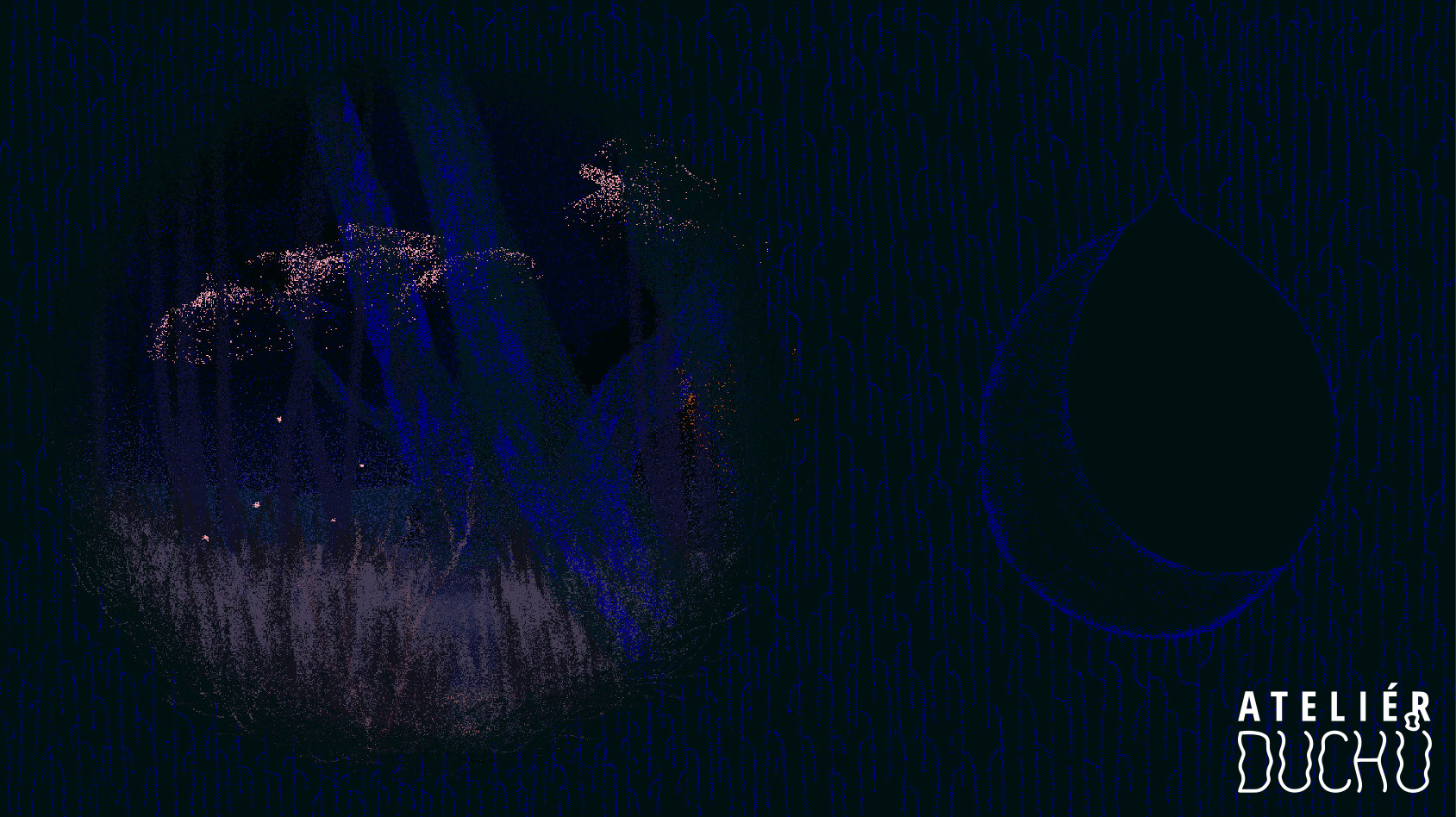 The project Forest captured selected compositions from the Vodárenský forest, which no longer exists in this form. That is why it is important to me to preserve its atmosphere - memories.