Hlad is an edible board game. It is meant to be eaten.

The game plan is a big printed tablecloth. The game pieces themselves is something you have to make. Bake, fry, prepare, that is up to you.

From a gameplay perspective, Hlad is relatively simple strategic game. Players move their pieces across the board, eat other players pieces and try to control the ccenter of the field. Once one of the players is eaten, the game ends. Whoever controls the center at that moment, wins the game. All that is accompanied by several other secondary mechanics. Simple, yet exciting to the very last bite. 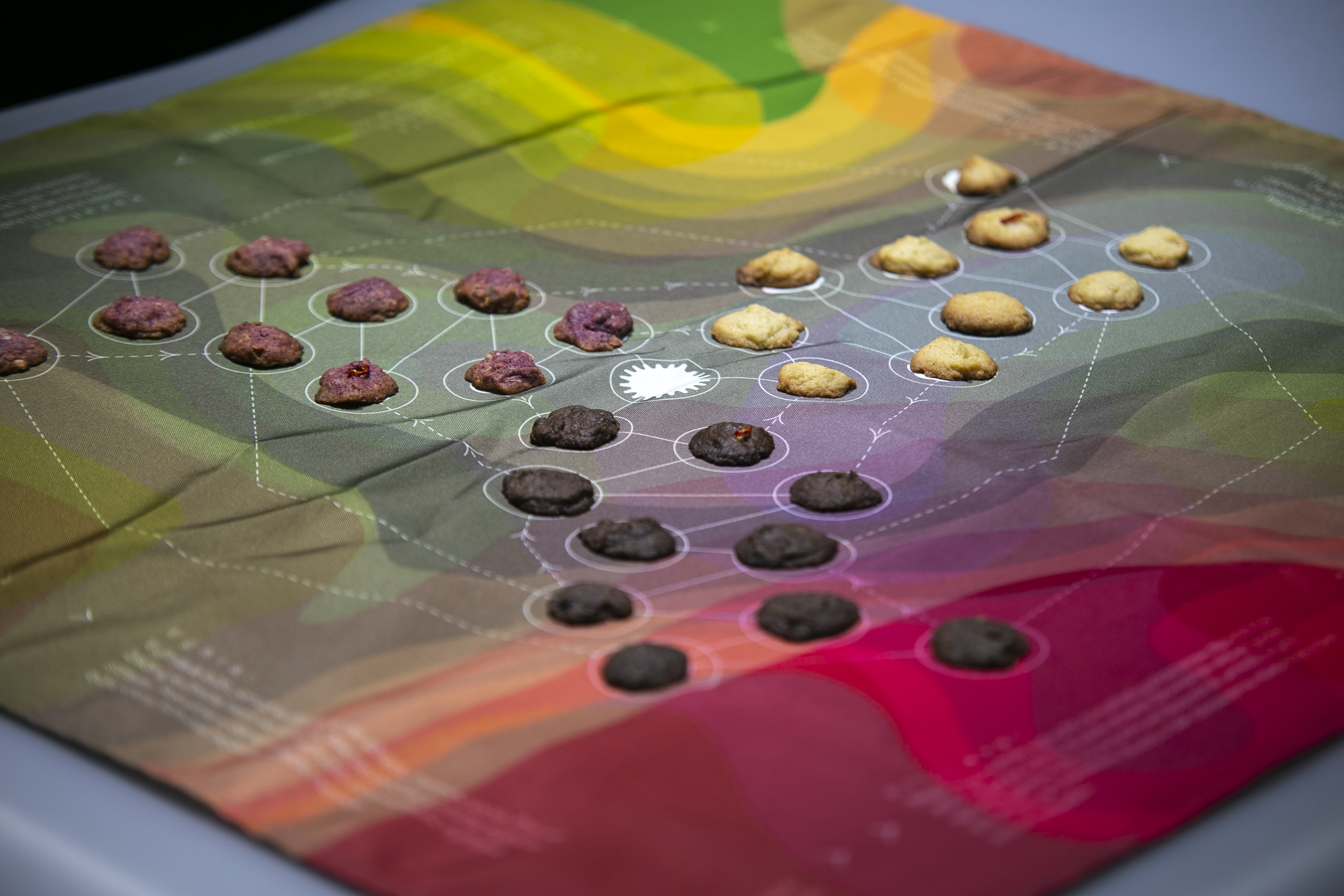 Hlad is inspired by Edible Games Cookbook. Respectively a talk by the author Jenn Sandercock on GDC (YT link). I have never read the book, there was not time. It was more tempting to create a new game.

From the very start one thing was set. You will eat during the game and eating has to be integrated into the whole game system. You will play by eating.

First test of the game field and movement did not even deserve a paper. Created in the middle of the night and played in InDesign.

First physical prototypes. Paper, pen and colored papers. First edible test was with muffins. Finding no1: Muffins are too big and it is almost impossible to finish.

3 players, simple game field, not all tiles are accessible from each other. The game is very short and it is hard to strategize in the limited time. The whole game field grows bigger from 4 tiles to 6 for every player.

Paper is not the ideal (or usable) material for a board game. The first prototypes were already soaked with butter from cookies. A table cloth was needed. 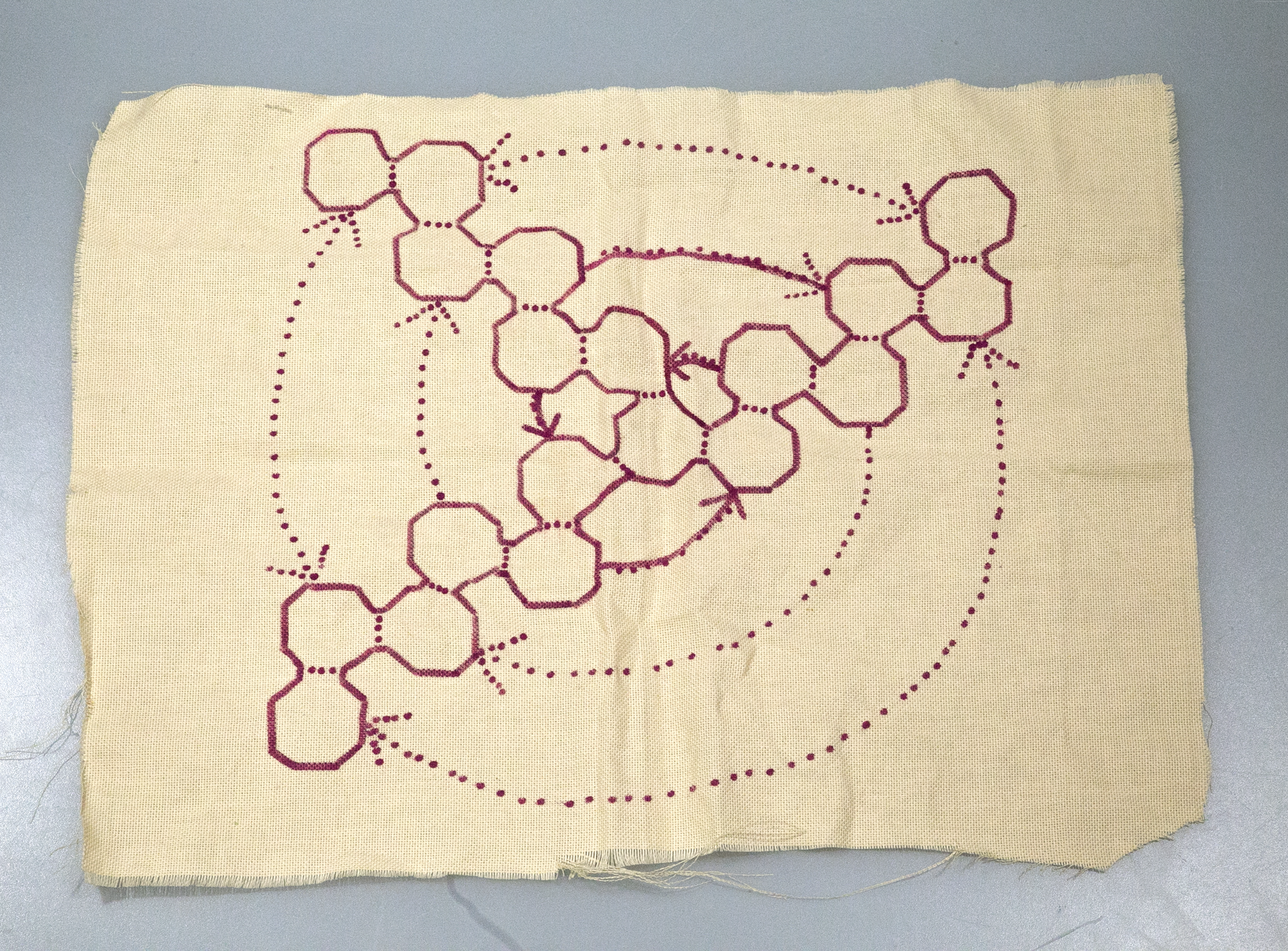 The game plan needs more work. The game is still too fast, sometimes the pieces get stuck far from the center. The game plan further grows bigger and more routes to the center are added. The game speeds up, the last rounds sometimes feel like a chess game. But instead of elegant chess pieces the players are suspiciously looking at chocolate chip cookies.

Perfect. Gameplay is finished for now.

Time to deal with manufacturing, clarity, rules, format, distribution. Ugh. First test with digital print. Colors are for testing purposes, magenta is mandatory. First version of the rules is printed on the cloth itself. 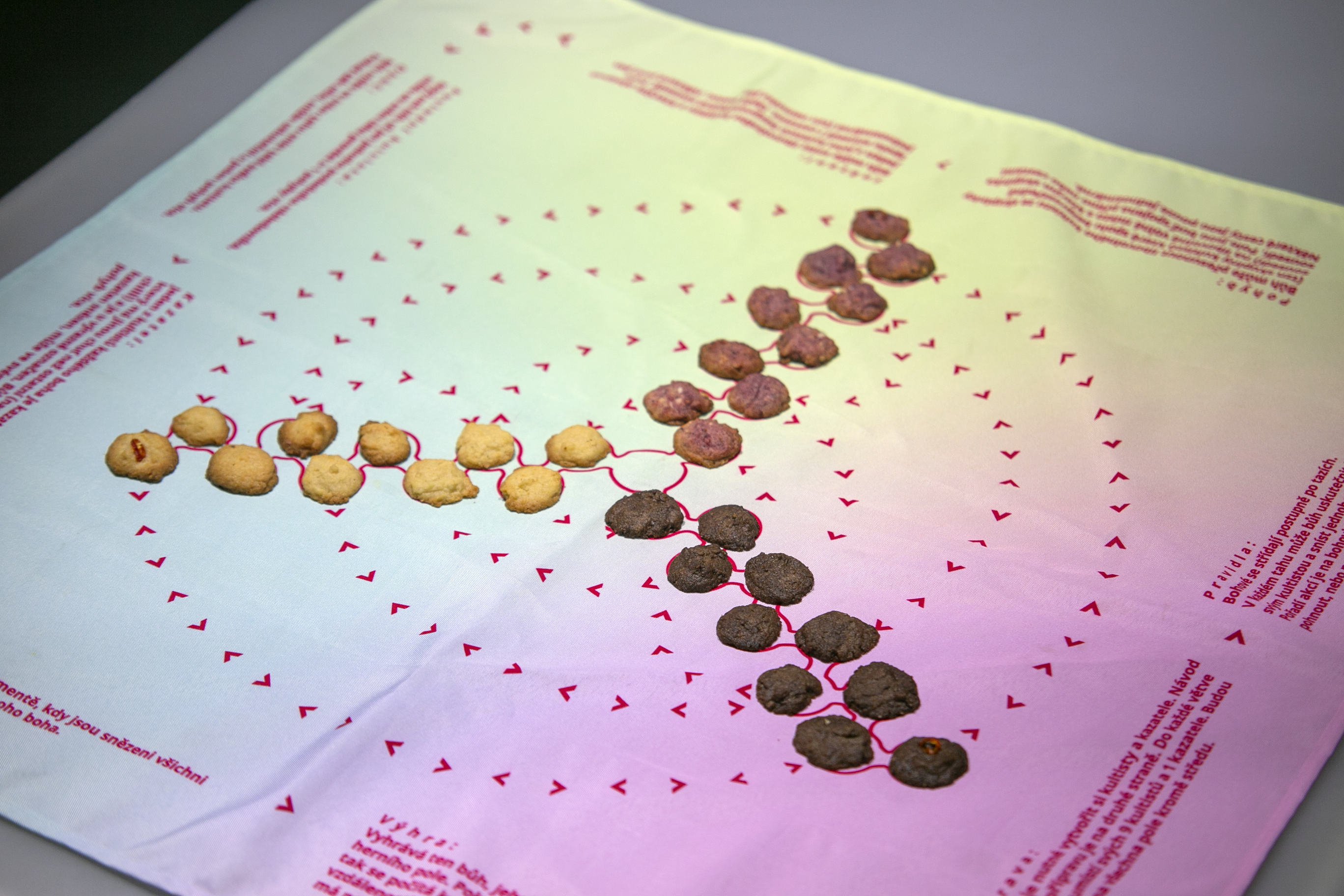 The rules are there but there is more information, like how to prepare the game. Big cookies also cover too much of the game plan and it can get confusing where you can or cannot move. Texts are too bold. New version: more space on the table cloth for the game, preparation information printed on another cloth and sewed together.

The version works, the rules are polished, the game field understandable. The new material and white color however causes another problem. After a few games there are staines everywhere. New goal: It needs to look good even if you spill a bottle of red wine on it.

Natálie joins the project and and designs new paths and tiles. All that is combined with new background, which is made out of staines. The visual information of paths is unified. The game becomes more understandable. 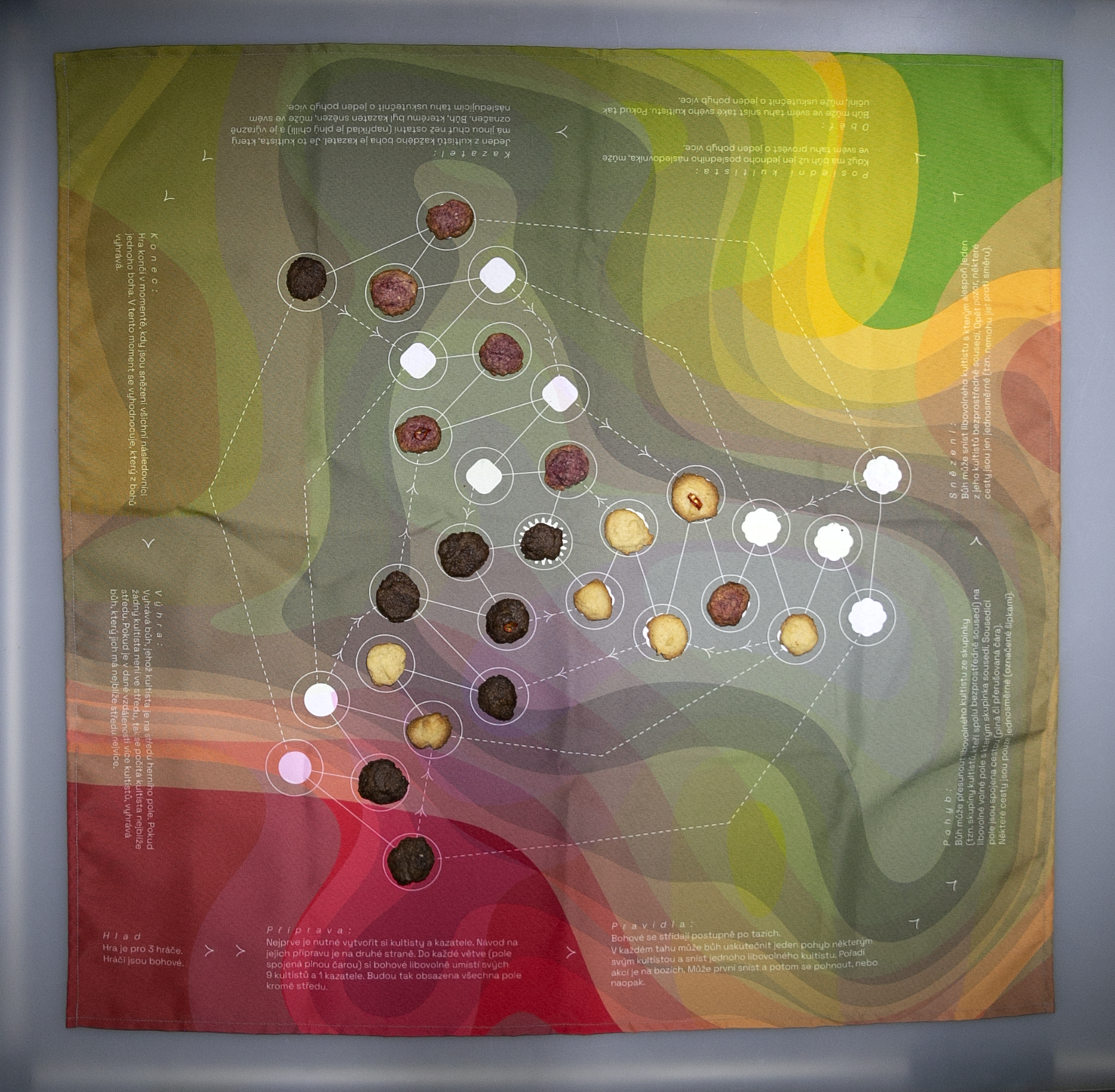 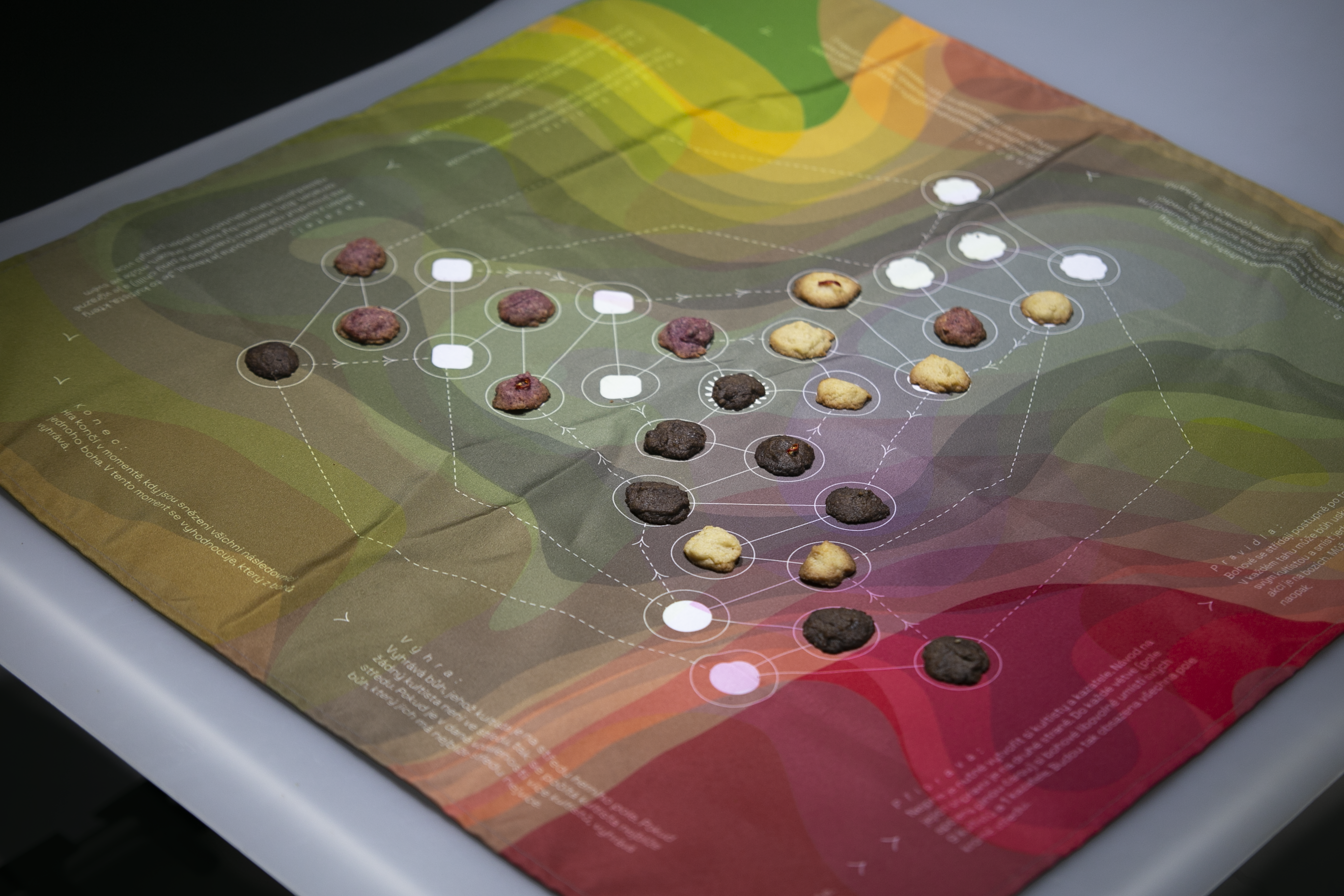 The last version was printed in 30 pieces, which disappear pretty much instantly.

In 2020 the development of Hlad will continue.  New looks, bigger game plan, even some changes to the rules. It will be even better.